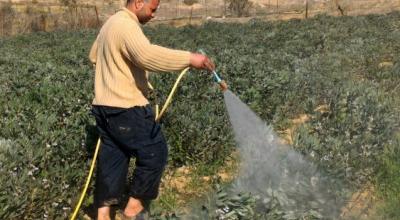 Since 2014, the Israeli military has been aerially spraying vegetation-killing herbicides in Gaza in order to clear out the area along the Gaza border. The spraying is done by aircraft a few times a year, during December-January and again around April. The Israeli Ministry of Defense claims the spraying is done on the Israeli side of the border and refuses to disclose the exact locations for “security reasons.” However, many Palestinian farmers had their vegetable fields and crops destroyed. The Red Cross confirmed that the herbicides “completely destroyed” crops and contaminated water sources located within 3,000 feet from the border. The herbicides were also found to have damaged crops up to 1.3 miles inside the Gaza Strip. The entire width of the Gaza Strip ranges between 3.5 and 7.5 miles. During the 2017-2018 winter spraying season, the herbicides affected 544 acres of agricultural lands and 2,570 acres of pasture.

Some Palestinian farmers have sought compensation for their loss of livelihood from Israeli authorities. The Israeli Ministry of Defense rejected their demands and refused to name the chemicals it uses, but it did not deny that the damages were a result of its spraying activities. Beyond the economic loss of the harvest, the herbicides are also harmful to human health and to the environment, as detailed below. In a similar case, Israeli authorities used aerial spraying to destroy the crops of of Palestinian Bedouin Israeli citizens until 2007, when the Israeli Supreme Court banned this practice because of its danger to human life and health. Today, the Israeli military coordinates the spraying with the Israeli communities that surround the Gaza Strip, for them to take measures to minimize the harm, but does not give comparable advance notice to farmers in Gaza.

A freedom of information application, filed by Israeli human rights organization Gisha, revealed the chemicals used and the companies involved. The spraying is executed by two Israeli civilian aviation companies, Chim-Nir and Telem Aviation, at the direction of the Israeli military’s Gaza Division. The contract with the aviation companies indicates the specific brands of herbicides to be used:

The same chemicals are manufactured by other companies as well, and we don't have evidence that the above companies' products are the ones being used in this case.

This is not the first time chemicals produces by these companies are weaponized. DuPont, initially a gunpowder and explosives manufacturer and now part of DowDuPont, was the largest supplier of gunpowder to the U.S. military during the American Civil War. Dupont later became part of the Manhattan Project, producing plutonium for the atomic bomb the U.S. dropped on Nagasaki. During the Vietnam War, both Monsanto and Dow Chemical were leading providers of “Agent Orange” to the U.S. military, which sprayed it over the jungles of Vietnam, Laos, and Cambodia, causing massive environmental damage and lingering public health problems. Dow Chemical also produced napalm for the U.S. military to use in Vietnam.

The detrimental use of herbicides needs to be understood in the context of the decade-long military blockade imposed by Israel on the Gaza Strip. In 2017, the UN estimated that more than 40 percent of the population in Gaza was food insecure, mainly as a result of the blockade. By destroying crops year after year, Israel may be in violation of Article 55 of the Fourth Geneva Convention, which requires an occupying state to ensure the food supplies of the occupied population. In addition, customary international humanitarian law prohibits the use of starvation as a method of warfare and prohibits attacking “objects Indispensable to the survival of the civilian population.” Under the blockade, local produce has become one of the main sources of sustenance and livelihood for Palestinians in Gaza.

This page was last updated on
8 October 2018